Today (Dec. 28th/29th) the Church recognizes the deaths of the Holy Innocents who died in the place of the Christ child in Bethlehem at the order of Herod and recorded in the Gospel of Matthew. These innocent boy children are thus understood as the first martyrs in the Church.

The historic validity of this event has been questioned by many, since it has little early corroboration from secular histories. But such criticism has little weight against the deep influence the story has had upon the hearts and minds of Christians in the Church since the beginning.

Here we see not merely the immorality surrounding the loss of innocent life, but the profound and deep sorrow of mothers for their lost children. Such a grief can hardly be understood merely through reason, and thus the Church has always had recourse toward other modes of representation. In a sinful world, we are often unable to feel anything (sorrow in this case) very deeply; and such is the sad consequence of not loving anything deeply. And yet it is exactly sacred art which helps reach us where words and arguments fail. 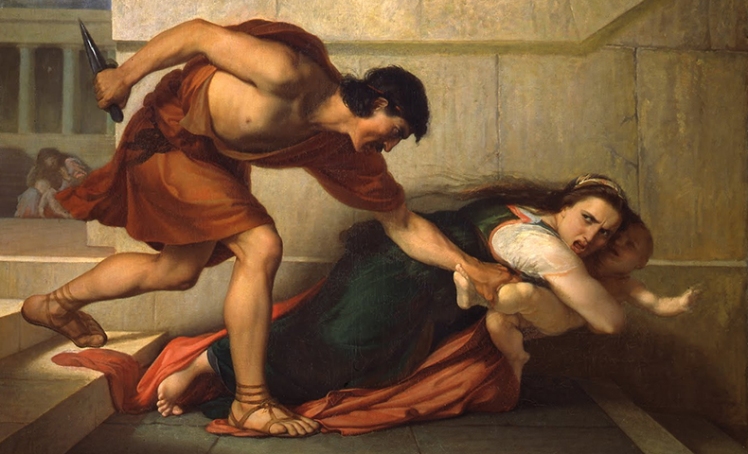 It is striking just how many artists have found this massacre of the innocents  particularly worthy of their masterful efforts, both through painting and in music. Many painters have focused upon the vicious and animal like brutality of Herod’s soldiers in their rabid effort to destroy the Christ child. One might observe in passing that traditional Catholic art has had no problem, nor shied away from, showing the peculiar perversions of masculinity within (ostensibly) pagan patriarchal society. The slaughter of the innocent (boys) is a case in point.

Many others highlight the grief and despair of the women and mothers, especially in the person of “Rachael weeping for her children and refusing to be comforted” (Jer. 31:15).

Poetically, many have doubtless heard of the Coventry Carol as a Christmas song, but perhaps fewer realize it is actually a song about the massacre of the holy innocents.  I have placed the words to Philips Stopford’s beautiful Lully, Lulla, Lullay, performed here by Voces8.