“Stand by the cross-roads, and look, and ask for the ancient paths, where the good way is; and walk in it, and find rest for your souls (Jer. 6:16).”

The Medieval Professor is about an idea. It’s the idea that if the wisdom of the ages could be brought to bear upon our present situation the result might prove quite powerful. The Medieval Professor is not one man, but as it were the collective consciousness of the traditional Catholic and medieval sage. Like I said, it is entirely an idea, or an ideal. This site is meant to help facilitate that idea, and give it form.

Thus, the Medieval Professor is dedicated to traditional Christianity through engaging the greatest of medieval philosophy and theology. Following such minds and leaders as Bernard of Clairvaux (12th cent.), Thomas Aquinas, Bonaventure, Albert Magnus (13th cent.), Nicholas of Cusa (15th cent.), Dante and many others, The Medieval Professor is an attempt to synthesize traditional Catholic theology and philosophy with contemporary questions in the humanities and arts.

Much has changed since the high middle ages, of course. Western civilization staggers, barely hanging on to the borrowed capital of the Greco-Roman world and its Christian synthesis in Christendom. Technical and physical advancement was inevitable, to be sure. For it would be hard to fathom a more fertile sole for the germination and fruitful growth of many ideas.

But the rise of nominalism among the Franciscans undermined a metaphysical vision of the cosmos, and the over-specialization of university faculties led to a breakdown in the essential conversation between disciplines. Apart from a few great thinkers and teachers such as Aquinas and Bonaventure, the medieval ideal was instantiated most perfectly not in the universities at all, but in the great cathedrals such as Chartres, Amiens, and Notre Dame—and in the liturgies they were designed to serve. Here the sacred sciences of the quadrivium were expressed in massed stone and statuary, rose windows and labyrinths, and in the interplay between light, music, and sacramental gesture.”
— Stratford Caldecott, Beauty for Truth’s Sake

And we have been dealing with the affects of this logical move away from the sacred toward the secular ever since.

The Medieval Professor is an effort at “ressourcement,” as the French say; a return to the greatest sources available to us today. And surely they are needed in the 21st century more urgently than ever before.

Please, feel free to browse, post comments and questions. And most importantly, enjoy the words of wisdom and the form of beauty found within our common Christian heritage. Some say “Christendom is dead.” I say, “Christendom, live forever!” 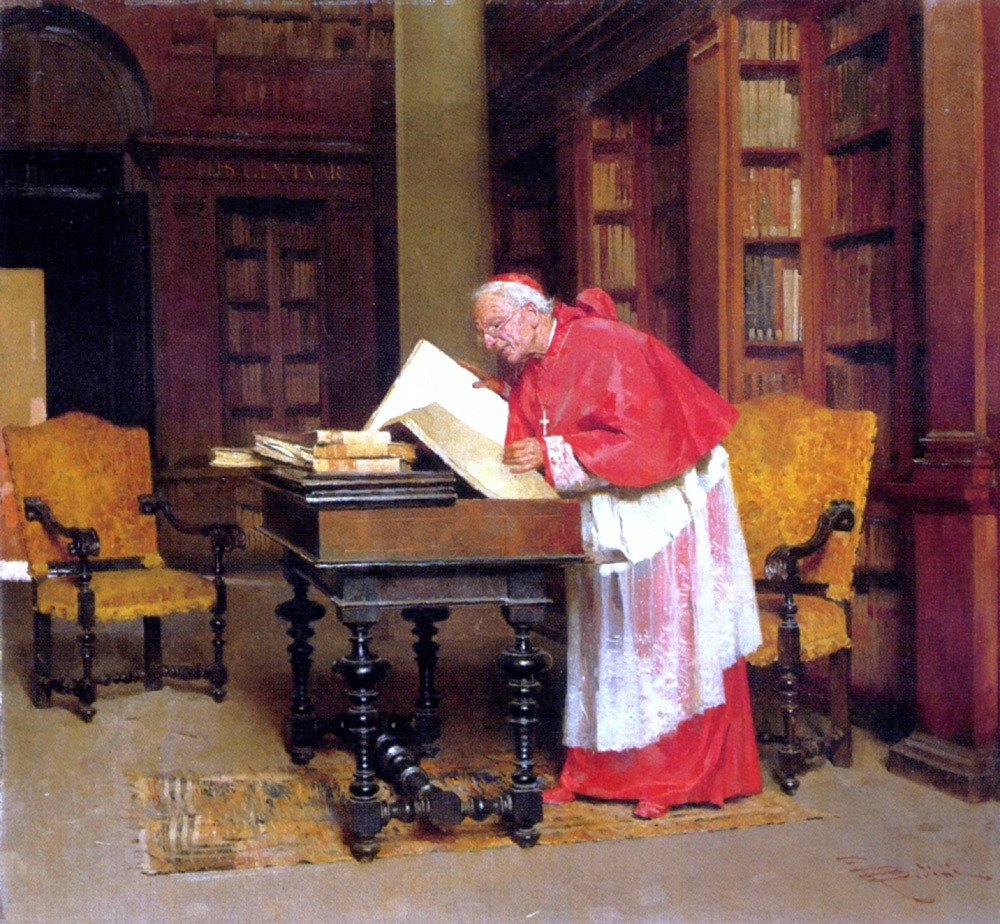 *Giovanni Paolo Bedini’s, A Cardinal In His Study